Campaign To Save Historic Canal Vessels

The Preservation League of New York State is seeking support for its efforts to protect the historic Tug Urger and other Erie Canal vessels that provide an authentic link to the past. The League recently learned that the New York State Canal Corporation under the New York Power Authority (NYPA) has plans to beach the tugboat Urger, flagship of the Erie Canal and beloved “teaching tug”. This vessel has introduced thousands of school children and members of the public to New York’s navigable waterways, reinforcing the role of the Erie Canal in making New York the Empire State. The Tug Urger used to travel up and down the canal system for school field trips and public events. 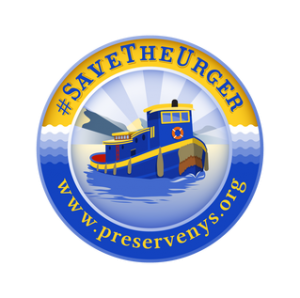 The Canal Corporation and NYPA want to pull it from the water and make it a dry-land exhibit at a NYS Visitor Center off the Thruway in Montgomery County. NYPA’s plans would permanently disable the Urger and prevent it from returning to service. The League is launching an advocacy campaign to call attention to the plight of the Urger and call on the Canal Corporation and New York Power Authority to work with stakeholders to develop a plan for the fleet of historic canal vessels, more than a dozen of which are slated to be scuttled off Long Island to create artificial reefs for sport fishing and recreational diving. According to Jay DiLorenzo, president of the Preservation League, “The Erie Canal is an engine for recreation and tourism with significant economic benefits for canal communities, businesses and New York State.

The Preservation League has been working for years to help communities in the Erie Canal Corridor address their unique preservation challenges and revitalize Canalside assets. #SaveTheUrger. Through more than $600,000 in grants, technical services, workshops, awards and the Industrial Heritage Reuse Project, the Preservation League has helped individuals, not-for-profits and municipalities throughout the canal corridor. Loans from the Endangered Properties Intervention Program (EPIP) have added more than $300,000 in support. “As we mark the 100th. Anniversary of the Barge Canal, it seems like a remarkably poor time to remove historic resources from the National Historic Landmark NYS Canal System” continued DiLorenzo. “It’s hard to imagine the future of the canal system without the Tug Urger and other significant historic vessels on the water. These vessels convey the sense of the New York State pride, stewardship, and heritage that are integral to a thriving, living waterway,” said Bob Radliff, Executive Director of the Erie Canalway National Heritage Corridor. 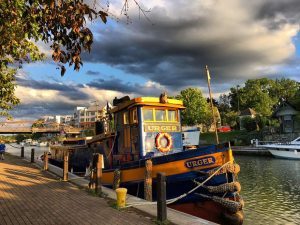 “The canal tugboat Urger has served the New York State Barge Canal for more than a century and until very recently has been a highly effective traveling educational exhibit” said Mark Peckham, maritime historian and retired director of the NYS Bureau of Historic Sites. “The Urger symbolizes the pride New Yorkers feel about the National Historic Landmark canal system. It is essential that she continues to be maintained and operated with pride” according to Dan Wiles president of the Board of Directors of the Canal Society of New York State, “The 1901 Urger already had a storied career even before plying Barge Canal waters in the 1920’s serving as a fishing boat on Lake Michigan.  As one of the State’s maintenance workhorses, its presence overlaps nearly all the years of the Barge Canal, now celebrating its centennial. It has been appreciated by generations across these many years and across New York State. It is one of the essential links between that past and the future. We all need it to continue this mission on the waterway, being shared by communities throughout the Canal Corridor” In addition to the effort to save the Urger, the League is also calling on the Canal Corporation and the New York Power Authority to work with stakeholders to develop a plan for the remainder of the fleet of historic canal vessels, which currently numbers 57.

More information and a petition is located on the Preservation League’s website  The Preservation League of New York State invests in people and projects that champion the essential role of preservation in community revitalization, sustainable economic growth and the protection of our historic buildings and landscapes. We lead advocacy, economic development and education programs across the state.

Thanks for your interest in Canal NY!

If you have any questions or would like additional information from Canal NY please take a moment and fill out this short form. One of our representatives will get back to you within 24 hours.