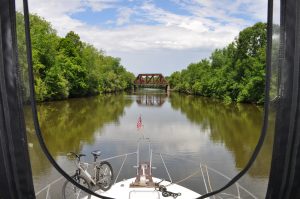 The NYS Canal Corporation recently announced the Navigation Season schedule for the next 3 years.

While push back continues from the hundreds of businesses who depend on the Navigation Season for their income, the Canal Corp under the control of the New York Power Authority continued to ignore the pleas of the businesses at a recent meeting held in Baldwinsville.

The meeting which was held on Nov. 19th. was billed as a follow up to a meeting held in April at the Canal Corp offices. At that meeting the attendees were told that shortened navigational seasons were going to be the new norm. NYPA announced that they have identified serious deficiencies in the maintenance and required infrastructure work that has not been identified in the past. This meeting which seemed as if it had as many NYPA’ and Canal Corp employees in attendance than stakeholders was designed to again tell us all that was wrong and how well they were doing to address it.   They were prepared to address one problem that was identified at the April meeting which was the fact that no one could make long range plans for their businesses when they didn’t know the opening and closing dates of the Canal more than 6-9 months in advance. NYPA announced the schedule for the next three years.

As in every year the opening dates are always weather dependent.

NYPA’s continues to maintain that they need the shortened navigation season due to their need to perform necessary maintenance and upgrades to the system. The meeting in Baldwinsville coincided with what’s called a “pump out” project at Lock 24. The Canal Corp led attendees of the meeting on a tour of the insides of the lock chamber. As Canal Corp employees led attendees on a tour of the drained lock and described the project, we learned that this type of project is routine maintenance for the Canal Corp. Each lock receives this type of maintenance on a 10-year schedule. While the Canal Corp employees appreciated the increased time that they had to complete the project, this type of maintenance has been going on successfully even when the navigation season started on May 1st and closed the end of Oct.

One of the concerns that I do think was addressed was the opportunity to discuss additional operating hours at the locks. While we have lost the battle of the length of the season for now, I think the door was left open to consider longer operating hours at more of the locks than we currently have.

We were told that no decision was made on the fees, and just recently in a tweet the Canal Corp had announced that there were to be no fees for recreational boats for the next three years. They noted in the tweet that lock throughs were up 3% to over 71,000 total locks and lift bridges passages.